The winner of the 2018 Richard Driscoll Memorial Award was announced today (11 October 2018) at the annual Healthcare Quality Improvement Partnership (HQIP) AGM in London.

Epilepsy12, one of 40 national clinical audits and patient outcome reviews commissioned by HQIP and funded by NHS England, was formally awarded first place for outstanding patient involvement in clinical audit. 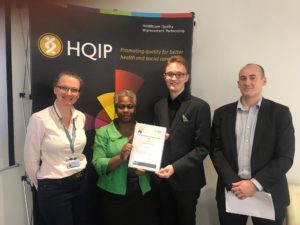 Led by the Royal College of Paediatrics and Child Health (RCPCH) and established in 2009, Epilepsy12  measures and aims to improve NHS healthcare services for children and young people with seizures and epilepsy.

Dame Donna Kinnair, Chair of the HQIP Board of Trustees and long-standing CEO of the Royal College of Nursing presented the award to Epilepsy12  project manager Calvin Down and the programme’s youth advocates in front of an audience of healthcare professionals, HQIP Trustees and staff.

A full list of all submissions can be found here

The inaugural Richard Driscoll Memorial Award, launched by HQIP  in September 2018, is a tribute to HQIP’s former Chair of Trustees, a passionate life-long ambassador for patient care, who sadly passed away in 2017.

“Last year, we tragically lost our out-going chair of the Board of Trustees, Richard Driscoll, following a hugely influential career. Richard worked tirelessly and selflessly throughout his life serving for a number of charitable organisations including the British Society of Gastroenterology, Crohn’s and Colitis UK and most recently as Development Lead for the UK IBD Registry.  It was truly inspirational to work with Richard both as a patient representative and chair of our organisation. We hope this memorial award contributes to an already powerful legacy for patient involvement.”

To find out more about the Richard Driscoll Memorial Award contact Kim Rezel on Tel: 020 3857 5039

The Healthcare Quality Improvement Partnership (HQIP) is led by a consortium of the Academy of Medical Royal Colleges, the Royal College of Nursing and National Voices. Its aim is to promote quality improvement in patient outcomes, and in particular, to increase the impact that clinical audit, outcome review programmes and registries have on healthcare quality in England and Wales. HQIP holds the contract to commission, manage and develop the National Clinical Audit and Patient Outcomes Programme (NCAPOP), comprising around 40 projects covering care provided to people with a wide range of medical, surgical and mental health conditions. The programme is funded by NHS England, the Welsh Government and, with some individual projects, other devolved administrations and crown dependencies. www.hqip.org.uk/national-programmes