Advancements in drug treatments, applied research and the development of evidence-based clinical guidelines have contributed to the reduction of deaths from asthma over the past 50 years.

Previous confidential enquiries have suggested that avoidable factors play a part in as many as three-quarters of cases of asthma death. These studies have often been small, conducted locally and undertaken at a considerable time after death. The National Review of Asthma Deaths (NRAD), reported here, is the first national investigation of asthma deaths in the UK and the largest study worldwide to date.Work on the NRAD was undertaken over a 3-year period and was one element of the Department of Health in England’s Respiratory Programme. The primary aim of the NRAD was to understand the circumstances surrounding asthma deaths in the UK in order to identify avoidable factors and make recommendations to improve care and reduce the number of deaths.

Asthma deaths occurring between February 2012 and January 2013 were identified through the Office for National Statistics (ONS) for England and Wales, the Northern Ireland Statistics and Research Agency (NISRA) and the National Records of Scotland (NRS). Extensive information about each death was sought from multiple sources, including primary, secondary and tertiary care, as well as ambulance, paramedic and out-of-hours care providers. 374 local coordinators were appointed in 297 hospitals across the NHS to collect and submit information to the project team, and 174 expert clinical assessors were recruited from primary, secondary and tertiary care throughout the UK to join expert panels that reviewed data. Each assessor participated in one or more expert panels, during which all information gathered on each death, including post-mortem reports, was reviewed by two assessors in detail, and this was followed by discussion and a consensus agreement of avoidable factors and recommendations by the whole panel.

Data were available for analysis on 195 people who were thought to have died from asthma during the review period and the key findings relate to this group. Denominators vary according to where data were missing. 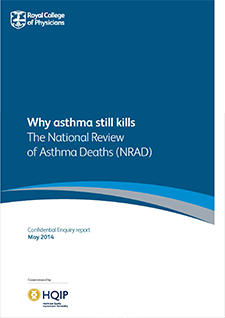